November 6, 2022October 28, 2022 Thomas Brown
* Products recommended in the post contain affiliate links. If you purchase something through our posts, we may receive a commission at no extra charge to you. See our full disclosures here.

Hermit Crab Facts For Kids: Some Facts You Might Not Know

Children today spend most of their time playing video games without knowing about animals in nature. Knowledge of creatures will help children avoid dangers if they are accidentally encountered. So, in this article, let’s learn about a unique sea creature – the hermit card.

What Is A Hermit Crab?

Hermit crab is the common name for more than 1000 different species of hermit crab in the world. The common crabs we see all have a hard shell to protect the body. However, the hermit crabs do not have this protective layer but live hidden, parasitic in the surfaces of other creatures.

There are more than 1000 different species of hermit crabs divided into 3 main categories: oceanic, semi-terrestrial, and freshwater.

You can find sea crabs at various depths, from coral reefs to the deep seabed. If you keep hermit crabs, you can put them in artificial coral reefs in the aquarium. This animal breathes with gills, and you can bring them out of the water as long as the gills are sufficiently moist.

Terrestrial crabs mainly live in tropical areas. However, they will also need to return to the water from time to time to maintain moisture in their gills and when it’s time to breed.

To learn more about this creature, let’s know about each different part. Starting from basic knowledge such as structure or behavior will help you better understand this animal. In addition, you may also be surprised by the struggle for survival of this crab in the wild.

The hermit crab has a long, spirally curved, and soft abdomen. Their bodies do not have a calcified layer, so to defend themselves, they have to find new homes for themselves, such as empty shells, snail shells, rice husks, even hollow pieces of wood. Their bodies can grip and hold to cling to the surface firmly.

The hermit crab also has 2 pairs of antennae and 5 pairs of legs with different tasks. The number 1 legs are responsible for making pliers. Legs 2 and 3 are used for crabs to move. The mission of holding onto and carrying the shell when moving is on the other two pairs of legs.

When the crabs mature, they will molt many times, and each type of crab will have a different size. Usually, adult crabs will be about 2-10 cm and weigh 200-500 grams. Every time they grow up, they will need to find a new, more giant shell to fit their size.

Because it is a mollusk, it is vulnerable, so this crab is mainly active at night. Many people misunderstand that hermit crabs live alone because they often have to move independently and live in a shell. However, this is a species that has a habit of living in groups.

They are vulnerable animals, so they will need the support of teammates when in danger. Even when looking for food, hermit crabs also organize foraging together. This animal also builds other relationships with anemones to keep them away from predators. 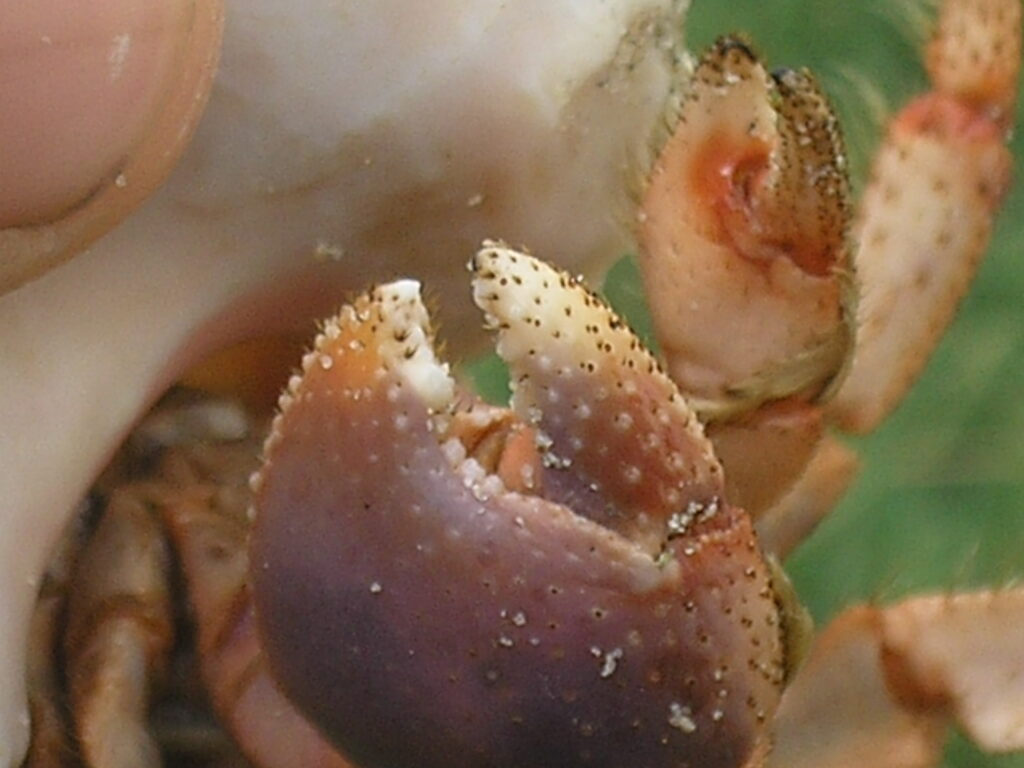 A hermit crab is an omnivore. They can eat all kinds of smaller creatures such as mussels, dead animals, or seaweed. In addition, they also eat worms, plankton, other invertebrates, and organic debris.

We also have an article about the food list for hermit crabs.

The process of reproduction

Different crab species will have other mating and reproduction processes. However, when it comes to breeding season, the female will give off a chemical or tactile signal that attracts the male.

When 2 males and females find each other, the male will come out of the shell to transfer the sperm package to the female for fertilization.

After mating, the male and female will separate, and the female will carry the fertilized egg to the shore, where it will break off and float in the water.

These larvae will live their own lives, parasitizing other ocean creatures. When baby crabs molt through several stages and are large enough, they will find suitable shells on their own and continue to wait until the breeding season.

However, hermit crabs can only breed in natural conditions. This means that crabs will not be able to fertilize and reproduce as pets. So if you see hermit crabs in pet or travel stores, they are all wild crabs.

When young, these crabs can molt every few months. Each time they need to find a new, larger home to fit their size. At this time, the battles for shells between hermit crabs and other species take place fiercely. The larger they get, the harder it is to find shells that are their size.

However, crabs that are not the same size give up the appropriate shell for another. When the first crab examines and finds that the shell is too big for them, they will come out and give it to another. And as soon as a crab finds a suitable new cover, they will leave the old shell to another. The conversion process will take place in order from the largest to the smallest crab.

When the size of a crab is too large, and they cannot find another suitable shell, they will have to use alternatives. Here are soft drink cans or plastic containers from human waste. So this is only a temporary solution, and the crabs must quickly find a suitable shell to exchange.

This tough competition comes from the hermit crab’s habitat. For aquatic species, their home comes from snail shells. However, the limited number of snails and the impact and collection of shells and shells by humans also make it challenging to find a home.

Because of the relatively small body size and no protective shell, dangers lurking around this crab are always dangerous. Even in its habitat, the hermit crab has faced a lot of animals such as cuttlefish, squid, sharks, and octopus.

In addition, water pollution and plastic waste are also a danger to marine species in general.

A hermit crab has a habit of living hidden in more rigid materials. So hundreds of thousands of crabs die every year from getting caught in plastic pieces and thinking that the plastic boxes are the new home.

A dead hermit crab is also a threat to other crabs. When hermit crabs die, their bodies produce and signal pheromones. This signal tells the other crabs that there is a new home and inadvertently drags them into the traps that the crab has just caught.

Because hermit crabs live hidden in the shells of snails and shells, it will also mislead people. They can catch snail shells, but there are no snails in there, but hermit crabs are hiding. Although the number of crabs in the world is still quite large, this state of human intervention also poses a threat to this species.

Many people must still find it strange to hear about crabs having mollusks and having to live and hide in dead snails. So we will answer a few questions so that you can better understand this creature.

Is it possible to keep the Hermit Crab as a pet?

Hermit crabs have an exciting appearance, so many people have brought them back to the family aquarium. This crab species is mild-mannered and non-toxic, so it does not cause allergies when in contact with humans or other animals.

Hermit crab farming is possible but not recommended. This creature cannot reproduce in captivity, so you are accidentally changing the marine ecosystem. In addition, catching hermit crabs also directly affects this animal because it changes the habitat and makes them lose their instincts. 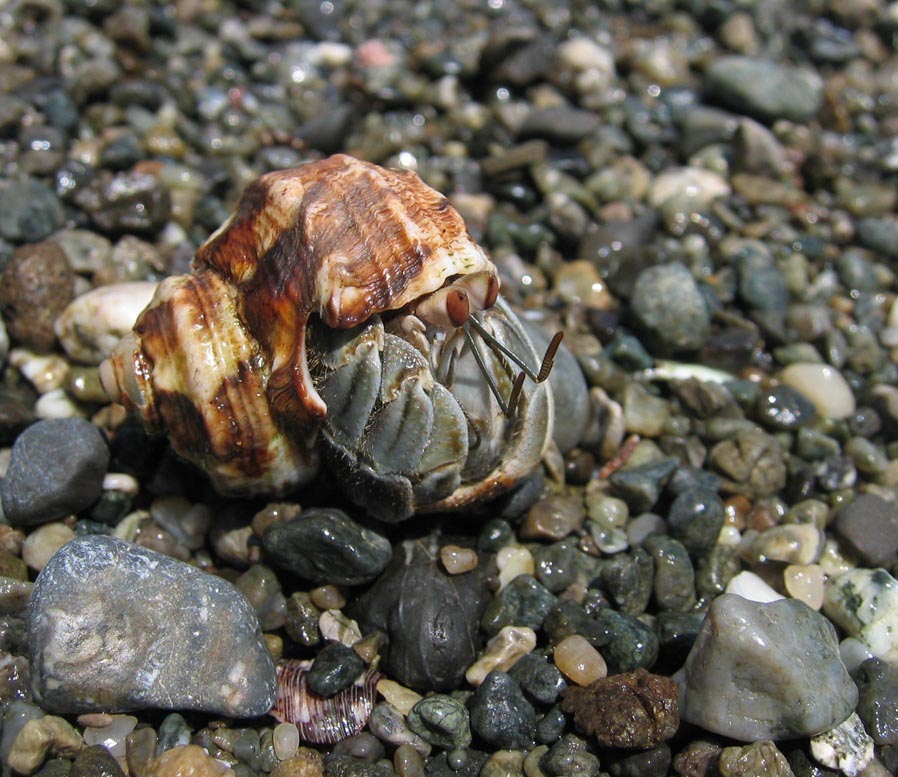 Where can Hermit crabs be found?

Hermit crabs live everywhere but mainly in tropical or subtropical areas. You can find this crab both on land and in water, in sandy areas. As for the terrestrial species, you can find them in tree hollows and rock ledges.

You can easily find these crabs in the same salt marshes or along the coast during the breeding season. In addition, some species can live both on land and in water, which you can find in tree trunks or coconut shells.

What are the conditions for raising a hermit crab?

Although keeping these animals is not good, many people still want to bring them home. You need to ensure the best conditions for crabs to live and stay healthy.

The Hermit crab is not a rare creature but faces danger due to human impact on the habitat. If wild crabs can live up to 70 years, captive crabs can only live about 20 years. Equipping with knowledge about hermit crab helps you understand more about this species and can help protect them.