October 20, 2022October 29, 2015 admin
* Products recommended in the post contain affiliate links. If you purchase something through our posts, we may receive a commission at no extra charge to you. See our full disclosures here.

Fungal infections are among the most common diseases seen in tropical fish. Because fungal spores are found in all fish tanks, they can quickly create problems in stressed, injured, or diseased fish. The most common type of fungus is called Saprolegnia which causes ‘cotton wool’ like growths to appear on the fins, gills, mouth and eyes of infected fish. This disease normally affects fish that are suffering from other illnesses such as White Spot.

As the name suggests, fin rot is a common disease that infects aquarium fish, causing the fins or tail to rot and disintegrate. As the disease advances the fins will get noticeably shorter, becoming red and enflamed along with bloody patches or streaks. The disintegration of the fin may continue until it reaches the base of the fin. If it does reach the fin base, the fish will not be able to regenerate the lost tissue and will die.

Dropsy is characterised by a swollen or hollow abdomen. The fish’s scales may stick out in these swollen areas.  It is caused by a bacterial infection of the kidneys which results in fluid retention or kidney failure. It is the fluid retention that causes the visible symptoms of this disease; swollen stomach and protruding scales. The swelling caused by dropsy can often be mistaken for a pregnant or overfed fish, which can delay early detection of the disease.

Dropsy is unfortunately very difficult to cure even if discovered early.

Gill disease make the fish appear to be swimming in a great hurry, but it does not move at all. The fins flap very fast, and the fish gasp for breath at the surface, or lie listless at the bottom. The gills can become swollen and discolored or may become covered in mucus. Bacteria, fungi and parasites in water can cause gill disease.

Columnaris is a common bacterial disease which affects tropical fish. It is often mistaken for a fungal infection due to its mouldy or cottony-like appearance. The mouth and fins of the fish may show signs of corrosion. Once the gills get infected the fish will begin breathing rapidly due to lack of oxygen. Gradually sores start to emerge on the body.

In some less common occasions, the disease will infect only the internal organs, and no external symptoms will be displayed. 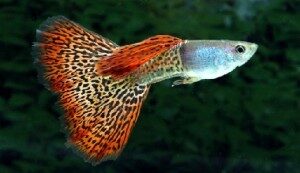 1. Do not overstock. Putting too many fish in your aquarium will have a seriously bad effect on water quality. Lots of fish mean lots of waste in the form of harmful ammonia. It can also result in stunted growth, illnesses amongst fish, and even aggression problems.

If you do end up with an overstocked tank be sure to perform regular water testing and maintenance. Consider giving away some fish if you cannot control your water quality problems.

2. Do not overfeed. Feed small quantities of food and check that it’s all eaten before adding any more. Stop feeding after a minute or two. 2 feedings a day is plenty. Feed a variety of different food such as flakes, pellets and fresh or live food.

Remember excess food which is not eaten will rot and raise ammonia levels in the tank.